The Bengals are set to sign Trent Taylor (Twitter link via NFL.com’s Mike Garafolo). The slot receiver/punt returner auditioned for the club over the weekend and emerged from rookie minicamp with a deal. 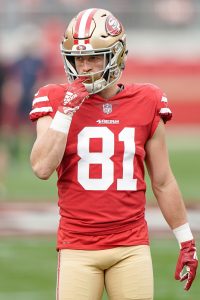 The Niners selected Taylor in the fifth round of the 2017 draft. As a member of Kyle Shanahan and John Lynch‘s first class in San Francisco, he showed early promise as a rookie. Unfortunately, he had to undergo back surgery prior to the 2018 season — Taylor says he never felt fully healthy that year. Then, he missed all of the 2019 season.

Taylor returned last year, but recorded just ten grabs for 86 yards in 12 games. On the plus side, he averaged 12.4 yards on his nine punt returns.

Now, he’ll look to get back to his old form with the Bengals. Both sides will be pleased if Taylor’s able to stick on the roster and reprise his 43 grabs for 430 yards and two TDs.