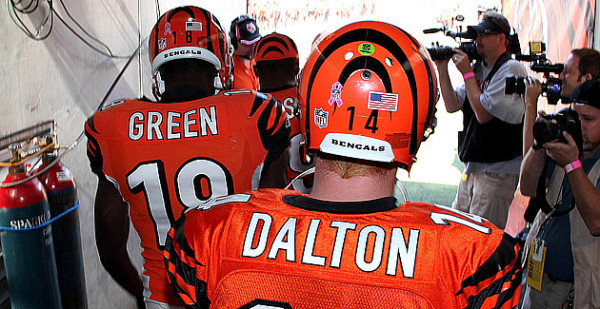 As the NBA Finals begin to wind down and the summer officially on the horizon, red-blooded American sports fans will begin to feel the drought of quality sports programming on their televisions. Sure, things like the NBA Draft, the MLB All-Star Game  and the ummm…Little League World Series…can serve as short-term remedies, but for 7 seasons nothing has quenched our collective thirst more than HBO’s reality-television series, “Hard Knocks.”

Yes, the show that produced a Shannon Sharpe roast session and his bucket hat made fun of, the show that saw the entire Jets roster play with Shakeweights during practice and the show that gave us the un-official retirement of Chad Johnson is officially back. Per the Cincinnati Enquirer’s Joe Reedy, HBO will be taking their talents back to Southwest Ohio to cover the Bengals:

For the second time in five seasons, the Bengals will be the featured team on HBO’s Hard Knocks: Training Camp series. Originally reported by the Philadelphia Daily News NFL writer Paul Domowitch and confirmed to The Enquirer via league sources, the Bengals have agreed to appear on this year’s series. An official announcement by HBO and the NFL should be coming sometime next week.

I don’t know about you, but I’m supremely excited about this for a few good reasons.

ONE: America needs to learn about Andy Dalton and A.J. Green. The flaming red-head quarterback and Georgia’s favorite wide receiver are both emerging stars in the NFL and the general population should start appreciating Cincinnati’s dynamic duo.

TWO: Pacman Jones will provide us quality entertainment. It might be Pacman trying to catch as many balls via punts to break his own record, it might be witnessing his own verbal battles while trying to defend the talented Bengals wide receiver core, or it might be the ongoing legal issues of Pacman that provides the chance to have our popcorn ready. Either way, I’ll be taping it just for this.

THREE: The show Hard Knocks has a tendency to bring out something “special” in people. What that “special” is, well…its kinda unexplainable. Seeing Tony Siragusa and Shannon Sharpe prank war themselves to no end was special. Seeing Casey Printers get indignant when he wasn’t chose as the Chiefs 3rd-string quarterback was special. Most importantly, watching the Barn Boss aka Bernard Pollard show the people how they do it Ft. Wayne, Indiana….was special.

Long live Hard Knocks, and let us hope that this is not the last of the series. Because this is where special happens.

The post Bring Back The Chili Dogs: HBO’s Hard Knocks Returns To The Queen City appeared first on .