Welcome to Week 15 of the Kaepernick Rankings. As you might expect, the free agent quarterback won’t be playing in the NFL in the foreseeable future. While that is the reality he faces, he is attempting to re-enter the NFL in a different capacity.

In wake of Carolina Panthers owner Jerry Richardson selling his majority stake in the team, Kaepernick wants to join Diddy in forming an ownership group to purchase the Carolina Panthers. Many naysayers have made light of their attempt become an owner, but in the words of Kevin Garnett, “anything is possibllllllllllle!”

I’m certain the good-ole-boy network that’s fully ingrained in the NFL will find a way to halt the ownership group featuring Diddy, Kaepernick and whoever decides to join them for obvious reasons. But damn it would be amazing to see something of that magnitude transpire.

In the meantime, there are still a plethora of quarterbacks who aren’t worthy of a starting position, let alone a roster spot. If you don’t believe me, just take a gander at this week’s Kaepernick Rankings.

DeAndre Hopkins should win the Ed Block Courage Award for risking his life each and every Sunday. Since DeShaun Watson’s season-ending injury, the Texans had the misfortune of going between Tom Savage and T.J. Yates at the quarterback position. The team could have easily signed Kap, but we know Texans owner Bob McNair would be totally against that move. Instead of signing a quarterback with a winning record, Houston decided to throw its season away relying on unproven quarterbacks.

At this point, I feel sorry for Bengals fans. For consecutive weeks, Dalton continues to show why he’s one of the most erratic quarterbacks in the league. In the past he’s at least had big games, but lately he’s been bad. In wake of Dalton’s shoddy play, I’ll be sending free Grippo’s potato chips to the first Bengals fan who voices their displeasure about the artist formerly known as the ‘Red Rocket.’ 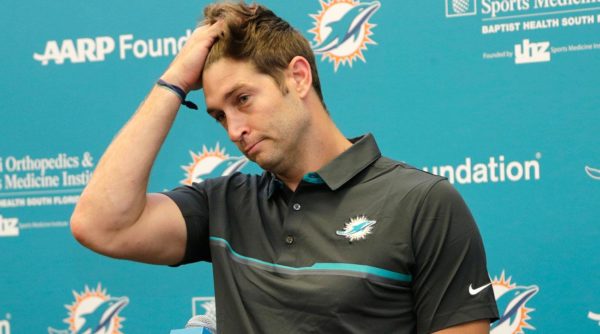 After Cutler played a near-flawless game against the New England Patriots on Monday Night Football, it was expected that he had a typical Jay Cutler game in the works. In true Cutler fashion, he’s been a model of inconsistency just as he’s been over the duration of his career. The inconsistent play we’ve witnessed time after time is frustrating to see, yet he has a roster spot over someone who is a proven winner and is far more reliable.

Columbus, Ohio born. Ron is a first-ballot healthy hairline hall of famer. He spent the summer of ‘08 eating calamari pasta because of OJ Da Juiceman. He also loves to write about sports while listening to Sada Baby. Follow him on Twitter @Ron_Hamp

The post The Kaepernick Rankings: The Rollercoaster That Is Jay Cutler Roared Again in Week 15 appeared first on .