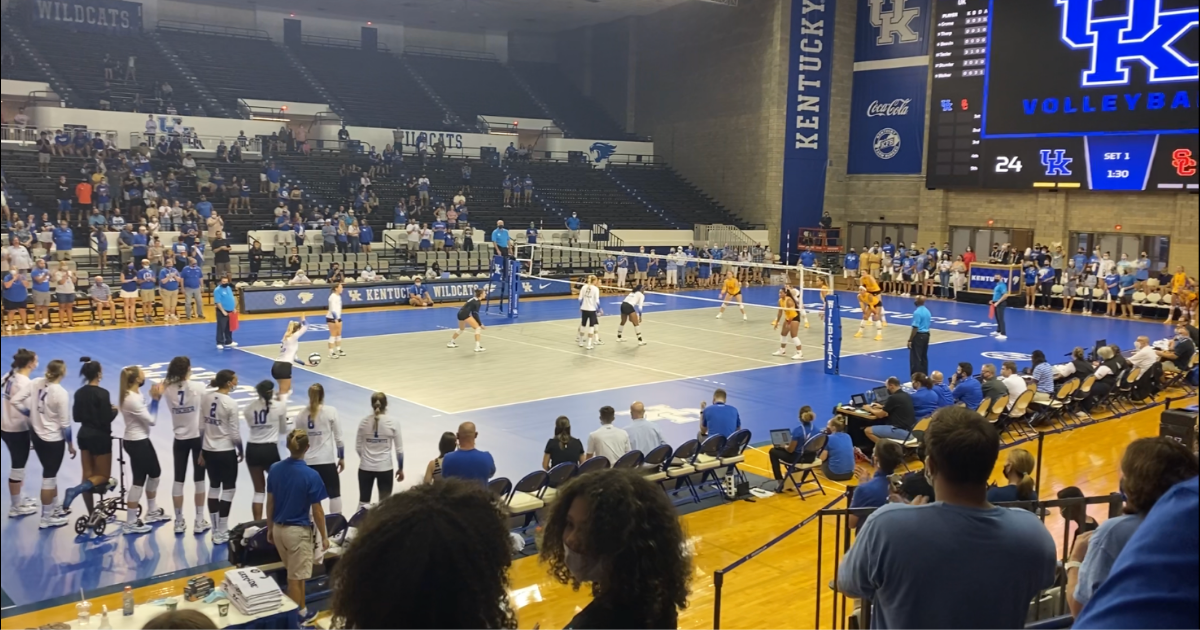 Well, it was a tale of two matches for the Kentucky Volleyball team on Saturday. In games that sandwiched the Kentucky vs. ULM football game, the v-ball ‘Cats dropped their first game of the year and swept the other. Here’s how it all went down.

Kentucky Volleyball dropped a shocker to the Blue Jays Saturday morning in a 3-0 sweep. It was the Wildcats’ first loss of the season and their first 3-0 loss since 2019. Certainly a step back from the strong performances in Dayton last weekend and vs. Northern Iowa on Friday.

Most of us newer volleyball fans aren’t used to losing — at all. Last year’s title team steamrolled over 90% of its opponents 3-0 and lost just once all year to top-ten-ranked Florida, who they then beat in straight sets the very next day.

This was an upset. No way around it. Perhaps Creighton is underrated and they’ll likely jump into the national rankings after sweeping their slate at the Bluegrass Battle.

However, this is a young Kentucky Volleyball team that hung a banner and dominated Northern Iowa late last night, then had to wake up for a 10:30 a.m. match.

Not excusing any lack of focus, but I can understand why the ‘Cats may not have been at the top of their game in the early slate.

That Creighton swept them is a little concerning though. All three sets were relatively close and UK tied the score late in both, losing 25-22 and 27-25 in the final pair.

Rough loss, but it’s a young, new team. Still a lot of promise going forward. On to the more positive half of the day…

The Kentucky Volleyball team we’re all used to returned to form in the nightcap. The ‘Cats sent the Trojans of USC down in straight sets as they re-established their attack and clean things up defensively.

In both the first and second sets, Kentucky pushed the lead out after the first 10 to 15 points. In the first, Emma Grome took control at service stripe with UK down 4-3. Her first two serves ended in kills by sophomore blocker Elise Goetzinger — who was Kentucky’s deadliest attacker at times vs. the Trojans.

After regaining the lead at 5-4, Grome reeled off three aces in a row as she targeted Louisville native and Trojan hitter Paige Hammons. Hammons botched all three and Kentucky pushed the lead out to 8-4 on a 5-0 run with Grome at the stripe.

From there, the ‘Cats cruised to a 25-15 set victory, ending with this exclamation point by Azhani Tealer:

The second set was quite similar, except Kentucky dominated just a bit more. The ‘Cats quickly doubled up USC 8-4, then again at 12-6. The Trojans climbed back with a small run to make it a 14-10 game midway thru.

But the Kentucky Volleyball team responded with a 4-0 run. Grome served as Goetzinger, Madi Skinner and Reagan Rutherford delivered consecutive kills to push the lead out to 18-10. They only allowed two more points the rest of the way en route to a 25-12 second set victory.

The third set was much more tense as USC stuck with the ‘Cats throughout. At 16 apiece the game was tied and Craig Skinner’s club was having trouble generating their attack.

Alas, UK was able to hang on and extend the lead throughout the rest of the set as they prevailed 25-22 to sweep their second match of the day.

I’ll be back with a more in-depth breakdown of the entire weekend tomorrow, examing what went wrong vs. Creighton as well as the typical Kentucky Volleyball dominance in the other two matches.

Until then, read up on Banner Night and the match vs. Northern Iowa.

The post Kentucky Volleyball splits double-header vs. Creighton/ USC appeared first on On3.