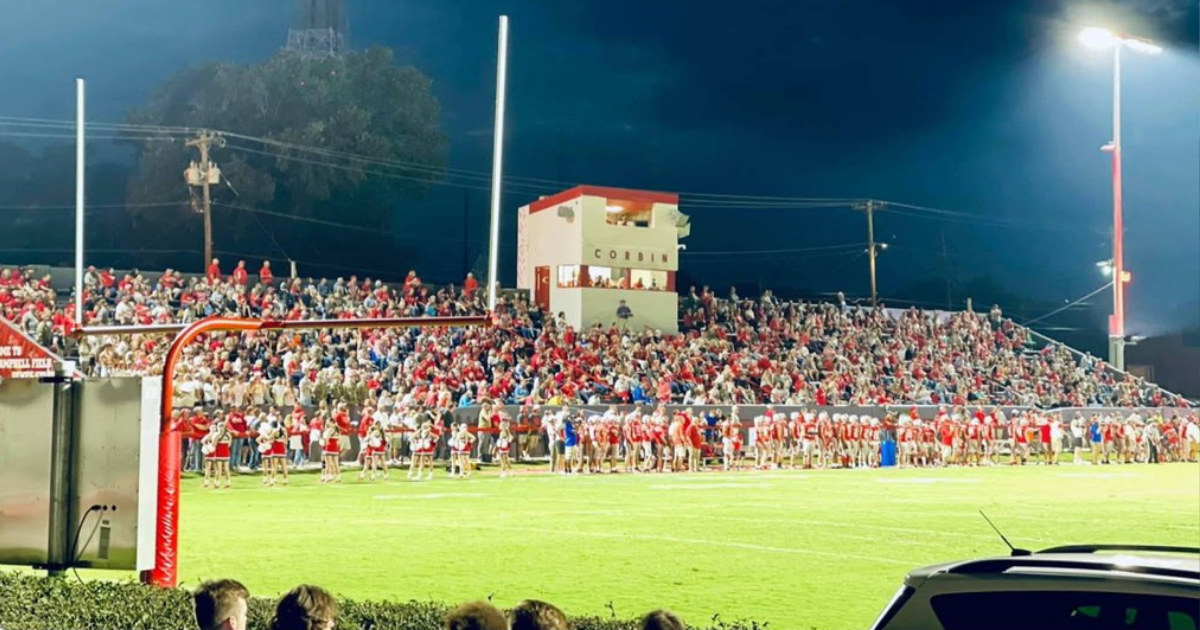 The Kroger KSR Game of the Week once again highlighted another week of KHSAA football, but it wasn’t the only game that you should’ve kept your eyes on.

Here are some notable scores and stories from week three of the KHSAA football season:

Two of the top three 4A teams went to battle in one of the two top-10 KHSAA matchups this past weekend, the other being No. 1 Male vs. No. 9 St. Xavier in the Kroger KSR Game of the Week.

The Redhounds controlled this game from the start, jumping out to a 10-0 lead in the first quarter and outscoring the Flyers 17-7 for the duration of Friday’s game.

Cameron Combs was back under center after freshman Kade Elam made his first varsity start in week two. His first-quarter touchdown to Brody Wells was followed by two rushing touchdowns over the next two quarters by Seth Mills. Those three scores followed by three field goals by Jacob Baker proved too much for Franklin County to handle.

Before Friday’s Grace Health Bowl, Franklin County had only given up 14 points in their first two games.

What a start to the season for Corbin. They’ll look to continue their momentum next week when they travel to Pulaski County to take on the Maroons.

Two years in a row these Catholic schools have met, and they have yet to disappoint. Trailing 27-13 with seven minutes remaining in regulation, Lex. Catholic scored 21-straight points for the comeback victory.

UK walk-on commit Jack Monday hauled in a six-yard game-winner from Lex. Catholic quarterback Jack Gohmann. The comeback started with a Gohmann touchdown run to cut the lead to 7, followed by an onside kick recovery and a 44-yard Walker Hall scoring run to tie it up.

“All those things that we try to set in place in the beginning of practice in July, it’s still all geared toward that run to win a state championship,” Knights head coach Nigel Smith said. “That’s our hope, is that we’re building each week to get better, so that we can meet our goal.”

Lex. Catholic has won all three games this season by six points or less, emphasizing Smith’s point of ‘one week at a time.’

Cov. Catholic had 272 rushing yards, but offensive stats don’t matter if the defense can’t pick up the slack. That’s exactly what the Knights did on D, snagging two picks to give their offense a chance to ultimately win the game, which they did.

Lex. Catholic is on the road for week four of the KHSAA season against Pleasure Ridge Park before meeting in-town rival, Lexington Christian Academy, on Sept. 17.

If you want to make a statement after losing your first regular-season game in four years — winning by 40 against a top-25 team is the way to do it.

Maroons quarterback Drew Polston came into week three as the leading passer in KHSAA with 673 total passing yards, but he was held to 32 yards on 12-16 passing (2.7 yards per throw). Last week’s leading receiver, Brysen Dugger, took over at quarterback after a tough outing for Polston and threw for 112 yards, an interception, and a touchdown.

Cole Sims had a field day on the defensive side of the ball, recording 14 tackles and two TFL in the 60-29 blowout of Pulaski. The Maroons have another tough week ahead as they’re set to face the red-hot Corbin Redhounds this Friday at home.

Simply put — 3A is down this year. KSR’s No. 1 3A division team, Paducah Tilghman, is now 1-2 on the season with losses to Graves County and Mayfield, respectively.

192 yards just won’t cut it against a top-ranked 2A team like Mayfield, who defeated Paducah for the 16th consecutive season Friday night in the 108th meeting between the two rivals.

While Paducah had their fair share of touchdowns, it was the two interceptions thrown by Blue Tornado quarterback Jack James that turned the tide for the Cardinals. One was taken to the house for a pick-six and the other set Mayfield up with a first and goal that resulted in a score.

Mayfield rushed for an impressive 240 yards where Kylan Galbreath, Brajone Dabney and Jatarious Starks all punched it in for a six-touchdown game from the running back room. The Cardinals gained 364 yards of total offense.

The post ‘Round the State Roundup: KHSAA Football Week Three appeared first on On3.