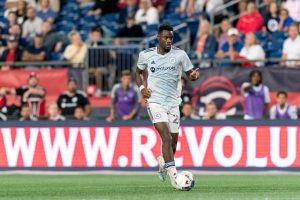 It’s official – after just one season with the Chicago Fire, Colombian teenager Jhon Duran is heading to the Premier League. Aston Villa are reported to have dished out $22 million for the young winger, an all-time Fire record. Duran becomes the second Fire talent to move to England this winter, joining 18-year-old goalkeeper Gabriel Slonina.

Who is Jhon Duran?

There was only one way to welcome @JhonDuran991 to Villa Park.

Duran, who just turned 19, was widely regarded as one of the biggest rising stars in all of Major League Soccer during his stint in the U.S. The youngster was scouted and signed by the Fire in 2021 from boyhood club Envigado, who compete in Colombia’s first tier. Due to league restrictions, Jhon Duran only joined the Fire after turning 18 in December of that year.

Though he initially struggled for game time, Duran became a fixture in Ezra Hendrickson’s starting XI in the second half of 2022. He scored his first goal in May, grabbing a late equalizer against FC Cincinnati with a world-class headed finish. Despite starting just 14 times for the club, Duran recorded an impressive eight goals and three assists during his time with the Fire.

Deployed mostly as a winger, the Colombian can also play in a false nine role. In his still-young career, Duran has notched 18 goals and eight assists across 81 professional appearances. Now, he will have the opportunity to test himself in the best league in the world.

Who Could Replace Jhon Duran?

After signing Duran for just $1.9 million, the Fire has turned a massive profit with his move to Villa. This continues a string of good negotiations by the club board. In August, homegrown goalkeeper Gabriel Slonina signed for European powerhouse Chelsea in a transfer worth up to $15 million with add-ons. At the time, it was a club-record departure for Chicago.

While MLS’ unusual transfer rules do not allow the Fire to convert all of the $37 million they’ve earned into General Allocation Money (GAM), the club’s big-money sales will still open the door to increased transfer activity in the coming windows.

Chicago has been loosely linked with French striker Olivier Giroud, who is said to be keen on a move to North America. Should the Fire succeed in bringing Giroud to Soldier Field, he would join a star-studded front line that already features MLS legend Kacper Przybylko and World Cup standout Xherdan Shaqiri.

READ MORE: Is Signing Xherdan Shaqiri a Good Move for the Chicago Fire?

More Youth to Come from Chicago?

As for the youth, the Fire academy and scouting system will continue to provide the fresh talent. The club’s recently-founded B-team, dubbed Chicago Fire II, is composed primarily of u21 players. Goalkeeper Chris Brady has been a standout performer for the side and is primed to replace Slonina as starting keeper for the first team.

Pacy forward Omari Glasgow also turned heads in MLS NEXT Pro last year, scoring five times in 15 appearances. The 19-year-old is already a full Guyanese international, having scored six goals for his country since debuting in 2021. He is also expected to move into the first team soon.

Glasgow and Brady are just two names off a large list of players that could be set for a lucrative transfer to Europe in the not-so-distant future. For all the criticism Joe Mansueto’s board has received for their work at the club, they’ve revitalized the Fire’s youth setup and will surely continue to develop and supply great talents to the best leagues on the planet.