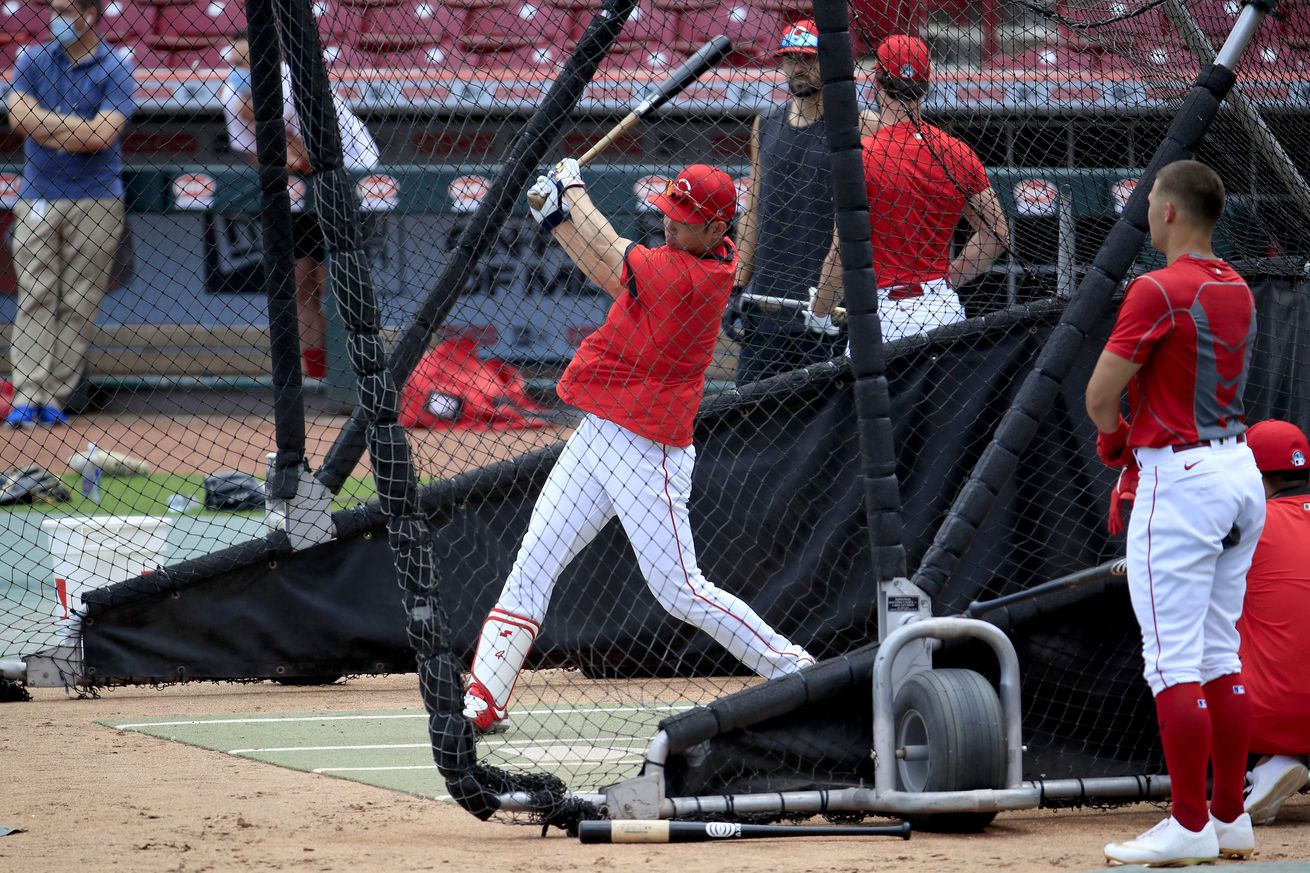 Wear a mask. This three-day holiday weekend has the chance to turn what is already an explosion of cases into a complete conflagration, the same way Memorial Day celebrations did just over a month ago. Celebrate, if you will. Congregate, if you choose to be so bold. Just wear a damn mask for the sake of any chance of a return to normalcy this calendar year.

In other news, most of the Cincinnati Reds had their first workouts today, with media members allowed limited access to view them at GABP. Apparently, the Prasco facilities are still off-limits to them at this time. I specifically said ‘most’ in that first sentence, too, since we found out yesterday that a pair of Reds players have tested positive for COVID-19 and are not yet in Cincinnati. Wear a mask.

C. Trent Rosecrans of The Athletic was on hand, watching one particular Red do very, very encouraging things.

Things are somewhat back to normal, Eugenio Suárez is going upper deck at GABP

Considering Geno was shelved earlier this spring with a shoulder knock suffered in a freak pool accident, it’s good to see him swinging freely once again. In other, somewhat related shoulder news, it appears Nick Senzel is raring to go, too…now.

#Reds Nick Senzel, “if I’m being honest, there was probably no chance I was going to be ready for Opening Day.” Went back to Knoxville. Says “it finally feels like a normal shoulder”

That’s quite the revelation from Senzel, who was able to DH in a handful of spring games before the pandemic shut things down completely, but never once took the field with a glove. His health paired with the addition of a DH this season certainly should go a very long way towards the Reds getting the most out of their offense, though it will still be interesting to see how manager David Bell assembles it all on a day to day basis. Will Shogo Akiyama, a career CF, move Senzel elsewhere? Will the Reds commit again to Senzel in CF after sending him out there green as can be last year?

For what its worth, that’s Shogo taking BP in the picture up top, so we know he’s in camp and healthy. Senzel, Suarez, Joey Votto, Luis Castillo, Lucas Sims, Jesse Winker, Phil Ervin, and Mark Payton have also been spotted at GABP, too. Our friends at Reds Content Plus spent the afternoon watching the workout on the team’s Twitter feed, noting that all three catchers (Tucker Barnhart, Curt Casali, and Kyle Farmer) were also present and accounted for, while each of Mike Moustakas, Freddy Galvis, Nick Castellanos, Alex Blandino, Cody Reed, Matt Davidson, and Josh VanMeter were in camp, too.

There has still been no word from the Reds on which players did test positive, and that’s certainly their prerogative. And again, I don’t want to come across as attempting to sleuth my way into breaking news about which players they were. It’s just going to become very evident at some point quite soon who those players are, and it’s not going to take rocket surgeons to be the ones pointing it out.

On a related note, MLB revealed today that 38 total positives came back in initial, league-wide slate of tests, just a 1.2% positive rate. That’s the good news.

The first set of results for COVID-19 testing have been jointly announced by @MLB and the @MLB_PLAYERS. pic.twitter.com/zlqZPuxLxh

The bad news, however, is in reference to that paragraph above about ‘sleuthing’ into which players have been impacted. The following exchange from Astros camp featuring new Houston manager Dusty Baker emphasized just how awkward the position is at this point.

Reigning American League Rookie of the Year Yordan Alvarez is not in Houston, Astros manager Dusty Baker said. Asked why, Baker said he couldn’t say because of “league mandates.”

Read between the lines.

I’m not exactly sure what else the league can do at this juncture, and I’m certainly not sure what else managers in Dusty’s position can say. It’s just a simple fact that players are going to test positive, it’s going to be more obvious who said players are the further into this we get, and that’s just going to be how it is. It’s a stark reminder of the effort and risk each of these players, coaches, staff, and those covering it are going to be forced to confront and power through for the next three months, and while we can certainly debate the merits of whether that’s a good idea or not, it’s undeniable that it’s going to happen – and that we’re going to be witnesses to it.

One player who, for now, seems to be in The Best Summer Camp Shape of His Life is one Joseph Daniel Votto, as MLB.com’s Mark Sheldon relayed.

Votto: “I feel refreshed as professional. I haven’t felt this way in years.” More to come later in a story. #reds

It’s worth noting that Votto has been a much better looking hitter over the latter half of seasons in recent years, so perhaps there’s just something about the heat, the nature of the beast that has him more dialed in during the otherwise dog-days. Just last year he hit .263/.374/.447 (.821 OPS) from July 23rd to the end of the year, with per-162 rates of 23 dingers, 39 doubles, and 104 walks. Peak-Votto that is not, but that’d still be an extremely valuable, acceptable #2 hitter in this revamped Reds lineup.

There will be more breaking, average, expected, and routine things to cover in the coming weeks. The coronavirus will, unfortunately, be the undercurrent of it all. Still, it does appear that we’re going to get some form of Major League Baseball in that time, and while we cannot physically be there for it, we’ll certainly be here for it.