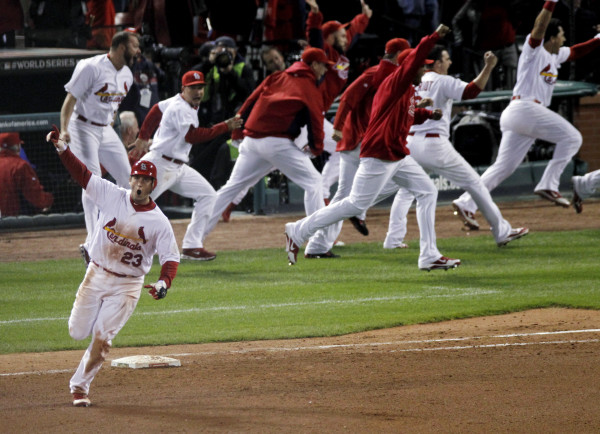 With baseball, everything feels so long ago. As a kid, I listened on my clock radio to the playoff games — sometimes falling asleep before the seventh-inning stretch. The call of Sandy Alomar Jr.’s home run off Mariano Rivera still plays in an archive within my head.

As critical as I am of baseball, it’s hard to let go of the golden Octobers. Here, we see who the heroes are and where the goats truly stand. Ragged arms are flailing towards the finish line, and tired legs are stretching singles into doubles.

The days of old — which baseball will forever attempt to preserve — bring memories back to our minds each autumn. Whichever team takes the crown this year will deserve it the same as those who wore it before them and as much as others who failed down the stretch.

This season, it’s hard to pick one team the non-invested fan should support in the 2013 MLB playoffs. Of the nine remaining teams, each has something to like.

Boston’s club was expected to dwell in the cellar. Instead, the Sox pounded their way through the American League East. Mike Napoli’s power and Dustin Pedroia’s never-ending grittiness helped pave the path. It’s a nice story, but all in all it’s hard to root for the Sox (my Yankees allegiances aside). A town that’s enjoyed the Bruins, the Patriots and recent success on Yawkey Way allows for little empathy.

It’s easy to say the same about St. Louis, although the town’s success is only rooted in the Cardinals. Every summer, the Cards find a way to play better than expected. Somehow, some way, St. Louis is there in the end. The Cards will likely be there in the future as well, so waving their pennant makes little sense.

Detroit hasn’t triumphed in fall since 1984, but it certainly doesn’t feel that way. This is a team with all the makings of a champion. Two great pitchers and a few bona fide sluggers give the Tigers more than a puncher’s chance. But, where’s the fun in pulling for a team with such power?

Out west, the Dodgers pulled it together this season. Rookie sensation Yasiel Puig is exciting with a knack for the dramatic. Los Angeles paid out the wazzou for its club, and the Dodgers have reaped the benefits. Aside from those old tried-and-true Brooklyn fans who are still breathing, the Dodgers don’t seem all that heartwarming. Vin Scully calling a final out would stand alone in that category.

Sports are all I know. Writing came naturally. Sports writer by night & sports writer by night. Philosophy major who thinks the unexamined sport is not worth watching. Always for hire, never for sale. I believe that silence is the virtue of fools and I can’t hear you.

The post Pick A Team For The 2013 MLB Playoffs appeared first on .